Above is a picture of the the new tail light assembly I installed on the Frog. It's called a "Tombstone Tail Light" for it's shape. It's made by Custom Chrome, and is actually made for a Harley between 1947 and 1952, I beleive. It's a very nostalgic design, but not nearly as bright as the original unit. For this reason, I've ordered the tail light bar like that used on a 1500 Classic, to relocate my rear signal lights. Once they're moved, I'm going to install dual filament sockets in the turn signals, install red lens on the signals, and wire them to become auxilary brake and running lamps. This light is too cool, though... 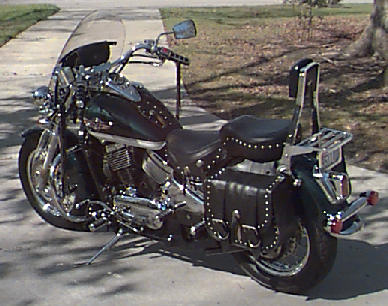 This modification is NOT for the faint at heart. Many Vulcan owners have installed these lights in various ways. Many find that they have to weld up holes in the fenders where the original license plate bracket was mounted, fill holes where the original tail light housing was attached, etc. I found an adapter plate (notice it between the fender and light assembly) that widens the footprint of the light from 4.25" to a little over 4.5", just enough to cover the original tail lamp mounting holes. Next, the adapter plate is tall enough to cover the original license plate mounting holes to boot.

The tough part was fitting the mounting plate to the fender! Since the fender is a compound curve, and didn't match that of the adapter's designed application, it took about 1/2 day of tedious trial and error "cut and try" work (and at least a 6-pack) to modify the adapter to the exact curves of the Vulcan's fender while keeping the angle of the light "square" with the lines of the scoot. Hey, it was worth the effort, as the finished installation looks as if it belongs there. I even fooled the dealer today, as they thought it must be some new Kawasaki accessory item, hehehehehee. Don't you just love it?

All of the above work was done back in 1999, when very little existed for the Vulcan 800 in the way of optional lighting. You can now see several types of lighting for the Vulcan 800 online at Scootworks on their Signal & Tail Lights page, as well as more goodies on their License Plate and Sidemount page.